Nothing tells you more about an organization than the way it makes decisions.

Do leaders trust team members? Do the people closest to the action get to make the call? Do team members have real responsibility and real control? All of these questions can be answered by one other one: who gets to make the decisions?

And nothing affects an organization more than the decisions the people in it make.

Great business minds know this. In fact, decision-making is at the heart of all business education. Nearly a hundred years after the case-study method was invented at Harvard, it’s still the foundation of the world’s best business programs.

Why? Because the case-study method puts top business students in the role of decision-maker. Over the course of a Harvard MBA, students will make decisions on more than 500 cases. Decision-making is simply the best way in the world to develop people. And real-life decisions are more important—and more fun—than any case study.

But outside of business school, few business leaders tap into the value created by putting important decisions in the hands of their people. Instead, “team players” are taught to do what they’re told. This takes the fun out of work, and it robs people of the chance to contribute in a meaningful way. Or, organizations will use a participatory style of decision-making in which recommendations are given to the boss, who then makes the final decision. This approach also fails to fully realize the value of the people in the organization.

What I am talking about is quite different. In a decision-maker company:

At AES, an energy company with 27,000 people in 27 countries, and at Imagine Schools, the country’s largest nonprofit charter school network, I have had the good fortune to give thousands of people the freedom and  responsibility to make decisions that matter. The idea is simple: treat people like people, not machines. When leaders put control into the hands of their people, at all levels, they unlock incalculable potential.

The Decision Maker is a fable, loosely based on my own story, that shows how the ideas that transformed AES and Imagine Schools can transform any organization. The events are fiction, but the passion, purpose, moral questions, and common sense are rooted in decades of my own experience. These ideas can affect the bottom line: cutting-edge research indicates that a decision-maker culture improves financial performance. But it’s not just about the numbers. It’s about people: what makes them tick, and what they can achieve when they’re given real responsibility
and real freedom.

One other thing: The Decision Maker is founded on the idea that all of us can make good decisions. So this story is not just for people who currently lead organizations. It’s for managers at any level who want to unlock the full potential of the people around them.

No matter where you stand in your organization, change can start with you.

How Bad Is It?

Tom Anderson could see the smoke rising from the manufacturing floor long before he reached the site of the explosion. But even the clouds of steam that belched from the broken machine couldn’t prepare him for what he saw when he got there.

The machine wasn’t just broken. It seemed to have been obliterated. Through the rolling mist, he could make out a gigantic hole flanked by twisted metal. Shards of glass crunched under his feet.

His partner, Jim Travers, was there already. He looked up as Tom approached.

Tom followed his gaze. Almost miraculously, none of the equipment nearby had been damaged in the explosion. But none of it was working. And neither were their people, who stood in clusters in the aisles, talking amongst themselves.

Columns of numbers began to run through Tom’s mind. He and Jim had taken over the medical device company only two weeks ago. They’d sunk everything they had into it. Helen Harris, one of the savviest private-equity investors in their field, had financed the rest, based on Tom and Jim’s successful track record as managers at a similar operation— one where they’d had no ownership at all. Their business plan was aggressive but lean. Tom knew it couldn’t withstand a shutdown for long.

Jim sighed. “Well, at least no one got hurt.”

A shock went through Tom. He’d been so worried about the broken machinery that their people’s safety hadn’t even crossed his mind. But despite his relief, he had trouble believing no one had been injured.

“Are you kidding?” he said, gesturing at the hunks of machinery beyond the steam. If metal couldn’t withstand the blast, what chance would a person have had? “What was he wearing, body armor?”

Tom’s heart sank. He and Jim had known MedTec had some problems with morale when they took it over. In fact, they’d seen those problems as an opportunity. The staff and product were both strong; they just weren’t being used to their fullest potential. Once Tom and Jim came in with their superior management techniques, they’d see higher productivity from the same people. At least that’s how the theory went. Their business plan involved changes they hoped would put them in the running for some regional “best employer” awards. They’d already put a pair of vintage pinball machines in the employee lounge, installed a micro kitchen, and started providing healthy snack foods free of charge. But it looked like they had a problem here that went deeper than games and snacks could solve.

“Doing what he was told,” Jim said. “He caught the indicators right away. He knew something was wrong. So he went to get his shift supervisor.”

“Thank God he wasn’t there,” Tom said.
“Yep,” Jim said.
“He didn’t know how to shut it down on his own?” Tom asked.
“Oh, no,” Jim said. “He probably knew better than anyone in the plant. He does it at the end of every shift. But he wasn’t authorized. Only the manager could shut it down mid-shift.”

“And in the meantime, the machine blew.”
Jim nodded.
Tom let out a long breath. “That’s crazy,” he said.
“You’re telling me,” Jim said.
Tom glanced around at the clusters of workers in the aisles. One man glanced back at him and then quickly averted his eyes, as if he was worried any contact with the boss might lead to trouble. Tom recognized the look. He’d given it to countless bosses himself.

“I’ve been trying not to,” Jim said. “Every hour they’re idle costs us thousands of bucks.”

Jim looked around. “What?” he asked after a minute.

“They look like us,” Tom said. “Before we bought this business. They’re just trying to keep their heads down and get through the day without the boss interfering too much. They’ve even got that look we were starting to get.”

“The glazed one,” Tom said. “The one you get from checking your mind at the door when you come to work.”

Jim crossed his arms and shook his head. “Maybe you’re right,” he said. “But I’ve got to get a technician in here to fix this thing. Or find us a new machine, preferably for free. I don’t think the mood of our employees is our biggest worry at this point.”

“Maybe not,” Tom said, as Jim headed down the aisle back to the main office.

But as Tom followed Jim, it wasn’t the broken machine that stayed stuck in his mind. It was the faces of their people. They knew how to get a machine into good working order, even if it was an expensive hassle. But people weren’t machines. They were a lot more complicated, and they didn’t come with a simple handbook.

What about them? he wondered. 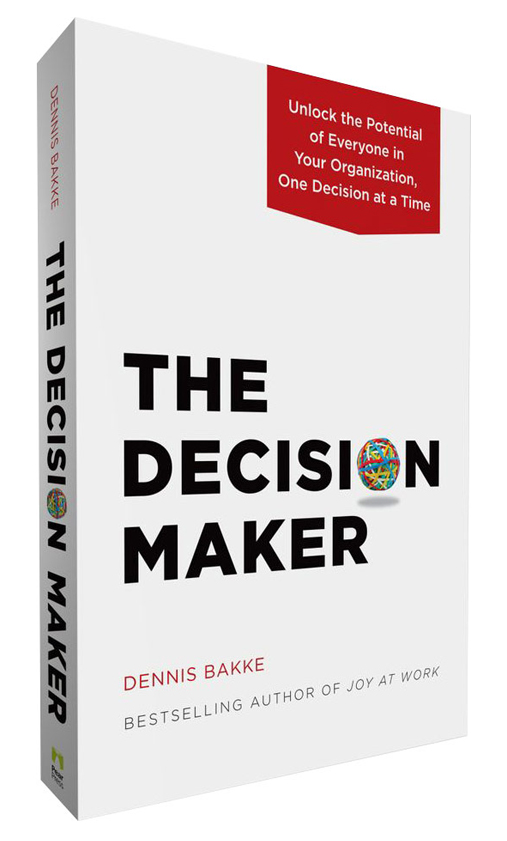